The Smart Cities are not the cities of the future; they are the cities of the now. A Smart City transforms our environment to make it more friendly, livable and accessible. This is the goal of Smart SDK project that Hopu has jointly developed with Mexico and Portugal.

This project also promises to improve the collaboration between Europe and Mexico, to create architectures and data models for the development of Intelligent Applications. The project brings together four “partners”; each of them, develop a different part of the project, as we will watch in the following video. For the more perfect union when it comes to developing out Smart SDK, Hopu has had the collaboration of Blanca and Joana from Infotec and the Instituto Tecnológico de Monterrey, respectively, both located in Mexico City.

Are you going to miss it?

Thank you so much girls for the time and effort dedicated. Thank you for your company. We are at your disposal, it has been a great pleasure to meet you.

The world is a puzzle that we assemble working together. was last modified: September 24th, 2020 by HOPU

In the search for a collaborative market in the development of a Digital Single Market that facilities the development of key domains such as Smart Cities and industry 4.0. For this purpose, HOP ubiquitous has joined forces with the FIWARE Foundation, as a company that has seen how FIWARE defined a disruptive action in the development of digital services. Thanks to FIWARE technologies, the digital revolution is possible through the promotion of economic and social sustainability. Although the idea was born in Europe, the orientation of FIWARE is international, reaching the creation of an open source system scalable to the whole world.

At the FIWARE Open Day held on 7 March, the European Commission transferred FIWARE initiative to the FIWARE Foundation, with the ambition to maintain and develop FIWARE technology.

HOP Ubiquitous relies on the future of this open source philosophy, and we want to be part of it, ensuring its sustainability with our research and innovation efforts and department. We aim to lead the FIWARE IoT Ready programme, with the development of hardware and sensors that connect worldwide in this same platform, committing to share the data collected using Open Standards and harmonized data models. For this purpose, HOP has become as a Gold member of the FIWARE Foundation.

HOP Ubiquitous aims to support the FIWARE IoT Ready Programme for the development of sensors that are connected to FIWARE, such as the connectors / agents to existing and emerging technologies as already done with OMA LwM2M, and also for the emerging protocols and technologies for Smart Cities in FIWARE such as LoRA and NB-IoT. Technologies that are also taking benefit of OMA LwM2M protocol and addressing the Smart Cities and Smart Metering market needs.

Thereby, HOP Ubiquitous joins a foundation lead by key technology disruptors such as NEC, which have just joined the FIWARE Foundation, sharing a segment with Telefonica, Orange, Atos and Engineering.

FIWARE Foundation focuses on the sustainability of FIWARE over time. The valorisation of an open source system in the development of fake rolex projects and the support for SMEs, public institutions, governments and IT industry.

FIWARE has also presenting an excellent expansion in the Smart Cities market, where has already reached a high impact in USA, India, Mexico and emerging in Latin America market with actions in Brazil and in Africa.

In definitive, FIWARE is being defined as the essential tool for the creation of a global platform that supports the digitalization of key markets such as Smart Cities and the development of a Digital Single Market in Europe and beyond its borders. 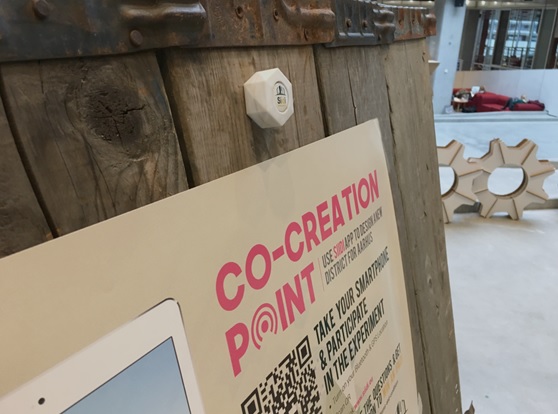 HOP Ubiquitous has successfully  deployed 2 Smart POI regions in Aarhus city. Siidi experiment is improving the communication between citizens and public organizations supporting the creation of ideas and new projects. In details, we have deployed 12 Smart Spots, i.e., 12 specific physical interaction points in Aarhus. On the one hand, 7 Smart Spots are available inside the DOKK1 building (https://dokk1.dk/), a reference building in Aarhus as a consequence of its unique architectural and functional design. On the other hand, 5 Smart Spots have been deployed in the area of the sociological research centre, Institute for X (http://institutforx.dk/), where the new Aarhus’ district is being planned. 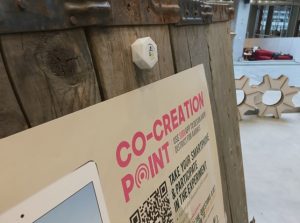 After the initial 10 days of deployment, the interaction points are successfully engaging users through Physical Web technology. The Smart Spots present different looks and feels based on their location. First, Siidi Smart Spots in Dokk1 are presenting a customized encapsulation designed and produced with 3D Printing using natural materials, this design presents an elegant a minimal size format to offer a proper integration with the environment. Second, Siidi Smart Spots in Institute for X presents an IP55 encapsulation to protect them to the adverse weather conditions.

Siidi connects with the users’ smart phone through Physical Web technology over Bluetooth Low Energy. In details, Smart Spots send a notification that invites participation to people between 1 to 20 meters (optionally it can be increased up to 70-150 meters). 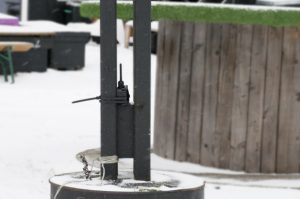 The invitation through Physical Web opens in the Smart Phone browser a specific section from www.siidi.eu (the section is based on the location). In Siidi Portal, the users can choose between different topics such as “urban reconstruction”, “culture and education”, and “entertainment”. These topic areas cover the key socioeconomic issues for the new district in Aarhus. In addition, every section offers additional options and an open suggestion box to offer theirs ideas in an agile and simple way getting effective communication between citizens and their city. These insights are focused in the design of a new district that will take place in the actual location of Institute for X.

Currently Siidi has high acceptance and participation by the public, which has become involved in the creation of new district. We were able to collect high information level. All the data are automatically uploaded to the Homard portal based on FIWARE and Sensinact IoT platforms. At the end, data visualization interface offers a summary of all the inputs (anonymized) and general statistics and insights.

Amusing and cold setting up! was last modified: September 25th, 2020 by HOPU 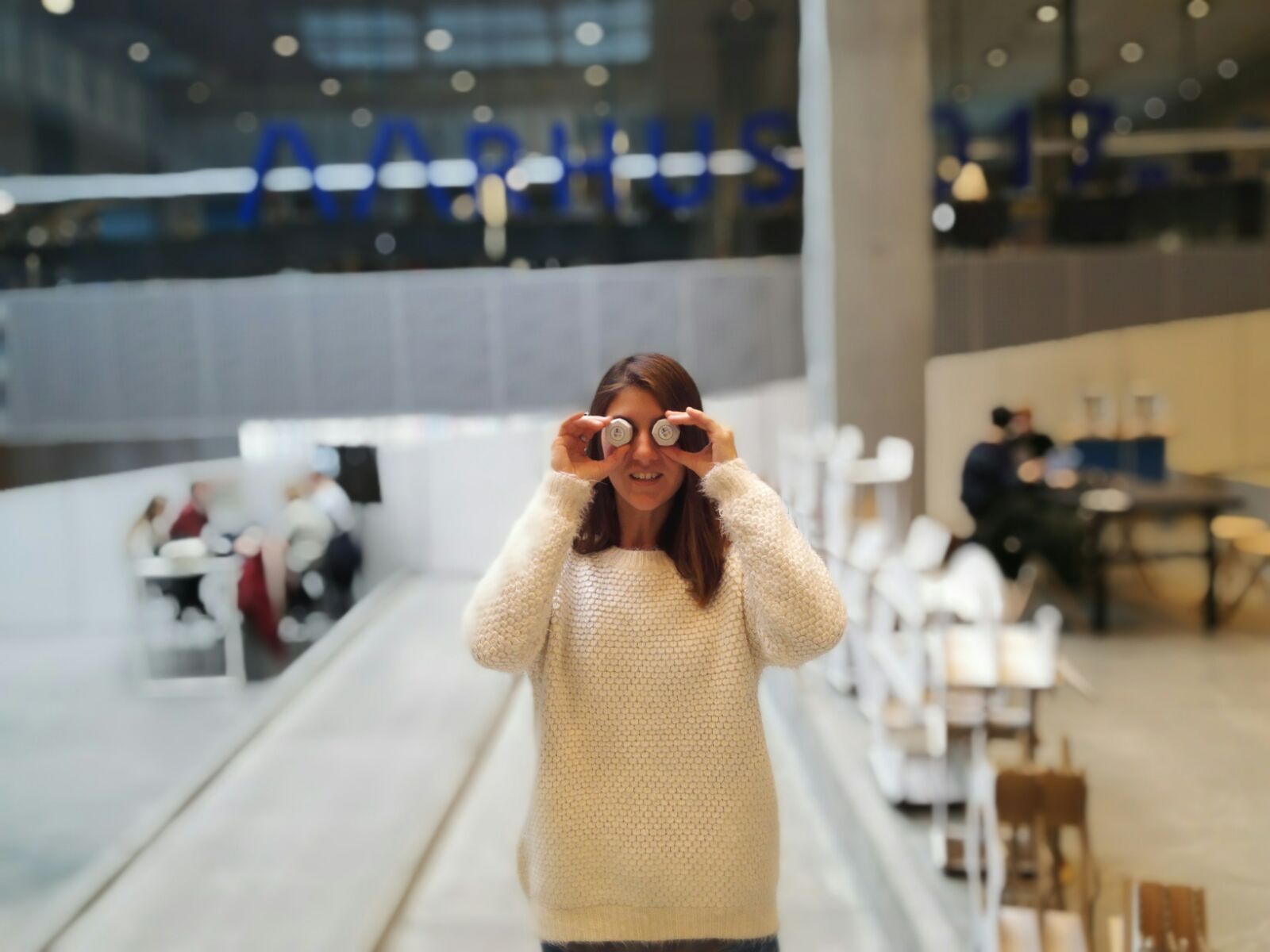 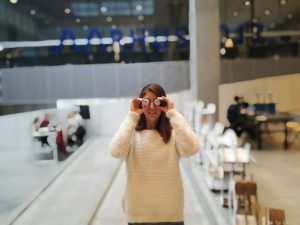 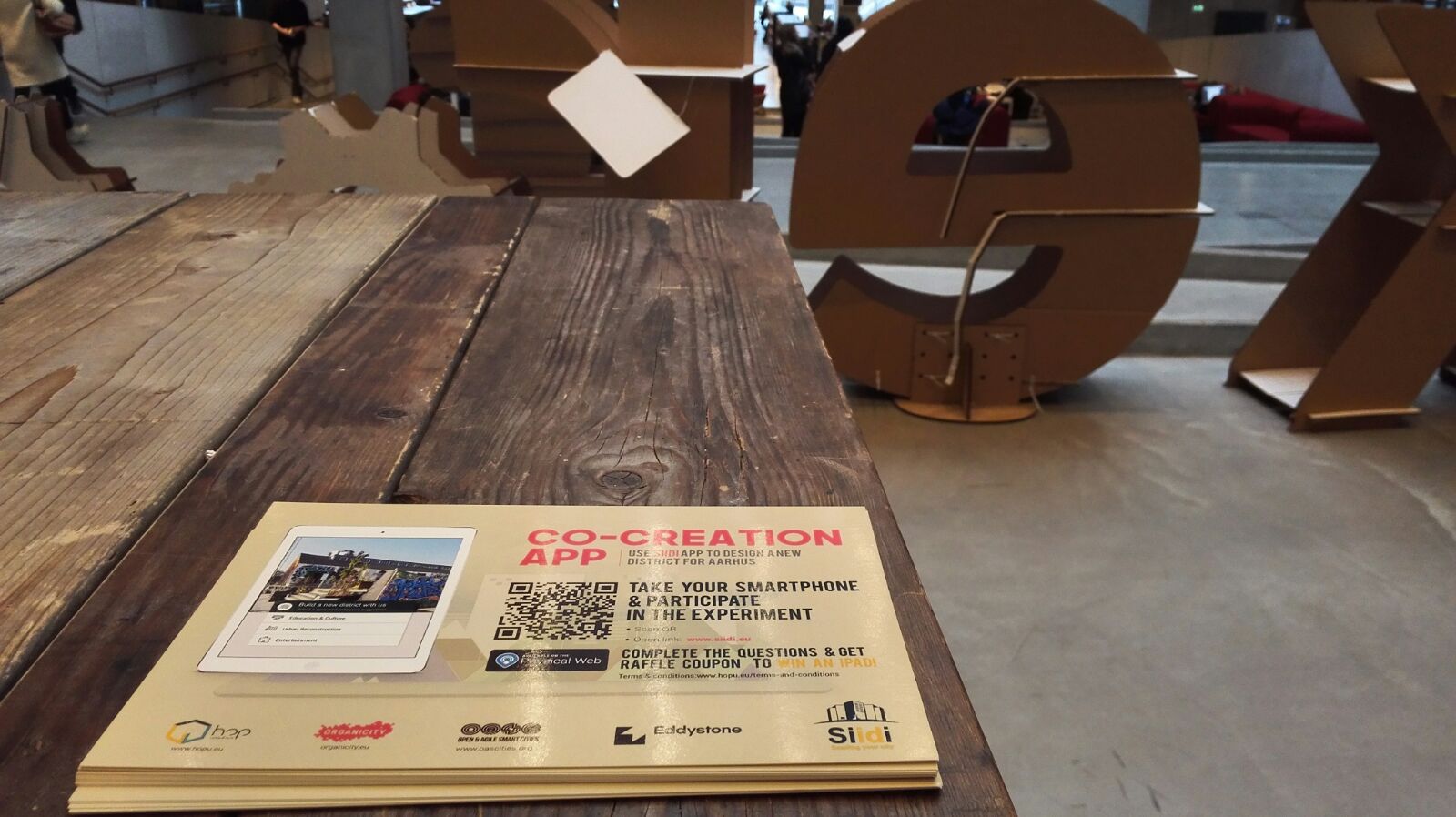 Hop Ubiquitous installed yesterday in Aarhus city the platform of citizen co-creation Siidi. It will be available in the Dokk 1 building and in the Institute for X until 31 March.

Siidi aims to carry out a co-creation process that allows valuable feedback on the running of each city, particularly in the development of new areas. The App is adapted to the necessities of the cities, looking at efficiency and tailoring the design and information to each user in each place. Co-creation service is possible thanks to Smart POIs technology that makes the interaction easy and agile.

Hop Ubiquitous realized yesterday in Aarhus the deployment of 19 Smart POIs of Siidi technology. With them, the citizens will be able to collaborate in the development and maintenance of their city and they will participate in the draw of an IPad in gratitude for their contributions. So… What are you waiting for to come and participate? 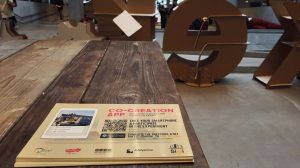 You should only approach to the Smart Spots with your Smartphone, allow the notification come in it and give your opinion about the promotional products topics asked. The more you comment on, the more participations in the draw.

All these opinions will save in a database allowing local authorities to know the preferences and suggestions of the citizens to work on the issues dealt with in a coherent and respectful way with their city. 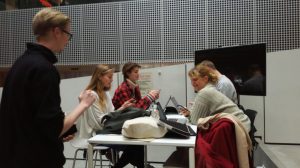