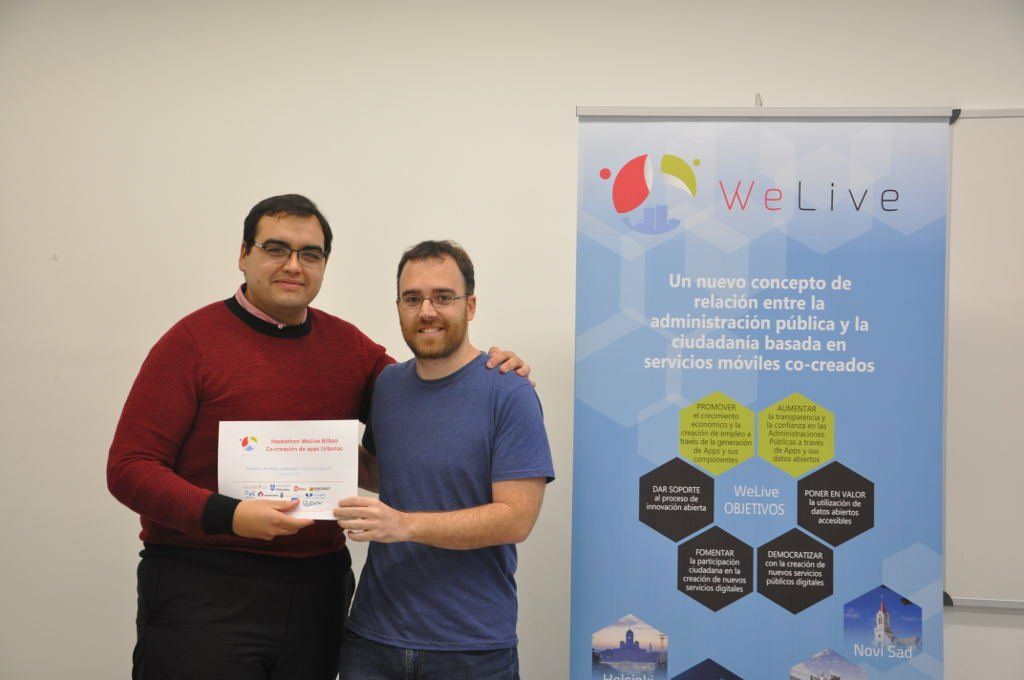 On November 30 at the University of Deusto, Bilbao, Basque Country, Spain. WeLive Hackathon presented the top 4 finalist, which gave solution to challenges proposed by the city of Bilbao. Our Smart Destination solution BI·Memories was awarded as the best application and solution.

WeLive is a platform for co-creation of mobile applications that meets the needs of citizens. It acts as a link among citizens, city and developers, who join forces to solve the challenges that the cities of Bilbao, Trento, Helsinki and Novi Sad publish in the platform. The Hackathon WeLive proposed by the city of Bilbao aimed to create a mobile application that would respond to the needs of the citizens and stakeholders of Bilbao. WeLive, together with its collaborators, Tecnalia, University of Deusto, Bilbao City Council, Engineering, among others, awarded BI·Memories as the best application of Hackathon WeLive Bilbao.

BI·Memories is a solution to respond to the need of cities to conserve and disseminate their intangible cultural heritage (as defined by UNESCO). This project preserves and disseminates the intangible cultural heritage of Bilbao with the aim of relating stories, anecdotes and feelings around a physical area that complements tourism experiences. These personal stories allow us to create an emotional relationship that extends tourist experiences through the eyes of Bilbao citizens’. A process that involves the visitor, who enjoy, comments and vote through BI·Memories, at the same time that they feel as citizens for a day.

The essence of the city of Bilbao are the citizens and their popular stories that constitute the identity of a point of interest. These experiences enrich to population and involve visitors with the cultural heritage of the city, making them live unique and complete experiences. Through their mobile phones the citizens of Bilbao and their visitors can access exclusive and geolocated videos that tell the stories of the citizens of Bilbao about the point of interest. The videos are uploaded to YouTube and thanks to our Smart Spot (our smart devices) nearby users receive a notification on the mobile phone that gives them access to a Web-App where they can watch videos and much more information without the need to install any application on the mobile.

Smart Spot contextualizes the information of each point of interest sending notifications by proximity to mobile phones through Bluetooth Low Energy and WiFi Direct in a range of 1 to 80 meters, without installing any native App. In addition the device measures temperature, humidity, noise, air quality and Crowd Monitoring, which allows BI·Memories to show users the comfort of a place to facilitate the planning of their tourist routes.

The videos disseminated by BI·Memories in its Web-App does not last more than a minute and, being related to the tourist point, allows to live at the same time a physical and digital experience. For citizens to publish stories in BI·Memories, they need to upload to YouTube and assign a specific hashtag for each point of interest (#BIM + name of the point of interest) that allows to BI·Memories recognize and introduce them in the corresponding point of interest. All videos must comply with minimum requirements (videos must not last more than 1 min, must contain the Hashtag and the position of the video recording must be horizontal). Once the videos pass to BI·Memories, the Web-App shows them according to the weighting between the visualizations, the number of “likes” and the time that has been published, showing the content according to the preference of BI·Memories users.

For the ideation of BI·Memories we made a co-creation process that is divided into different stages, the first one is to know the needs and interests of the citizens, so we use the City Living Lab of Ceutí, where we carry out different Workshops with citizens of all ages and with the City to identify the needs of the place. In this stage it was detected that a large part of the citizens of Ceutí had a great interest to preserve the stories of the past and to make known the connection they have with this territory. This project was born with the aim of adding the experiences of a town to the tourist experiences to involve visitors with the material and cultural heritage of Ceutí.

Once we detected the need and proposed the solution, we started using the prototype that helped us understand the dissemination of the town’s stories. For this reason, the Web-App shows the content in a one-minute video, capturing the attention of the users. These contents contextualize the information about real experiences in a physical place. In addition, the tool is disseminated by Physical Web, thereby, users do not have the need to download any App, freeing space on the user’s Smartphone and opening endless viewing possibilities.

Anecdotes and personal experiences, human tourism for humans, through citizens, Smart Spot and the intangible heritage of each city.

We adapted the prototype of Ceutí to the city of Bilbao through the Hackathon Go App Bilbao, where we had the collaboration of two mentors who helped us understand the needs of Bilbao. The content of the Web-App will be generated by the citizens and it will be updated by the same people from Bilbao. In addition, BI·Memories connects tour guides with visitors to make trips through the city.

The first point deployed in the city of Bilbao is within the University of Deusto, specifically in the “Plaza de la Memoria”. Starting from this point and as part of the co-creation process, we contacted Bilbao citizens and media to know their interest in the project.

Within the process of co-creation, the last stage was the use of the WeLive tool, which allowed us to know the challenges proposed by the city of Bilbao, to know the needs of its citizens and to publish BI·Memories in the ideation space, where all those interested could comment the Web-App for its improvement and evolution. WeLive also helped us to the development of the Web-App, since it put at our disposal Building Blocks (small modules programmed to bring our solution to reality), open data repositories about events, and a Marketplace where to publish the solution for the citizens of Bilbao.

We will continue with this proposal towards a new type of tourism, Smart Destination, in which provide agile experiences are offered that invite co-creation and citizen participation in the generation of content. BI·Memories, as a finalist of the first phase in GoApp Bilbao, participates in the second phase of this Hackathon, called CimuBISARIA, with which the Web-App will be launched in the Google Store and iOS Store this December.

BI · Memories wins the WeLive Hackathon for the city of Bilbao. was last modified: October 8th, 2020 by HOPU